Thailand has been nationally and internationally accepted as a country succeeding of the tobacco control with explicit policies, the best tobacco control laws and tobacco control operations in various target groups over ten years. However, there were still some flaws in its systems and work procedures, making it less successful and efficient. Namely, there was unclear and systematic organization in developing and intellectually supporting members. The social approach operations still lack of significant information, innovation, network and continuity to inform people, community and society about tobacco control. There was a deficiency of continuously and systematically follow-up on the results and conclusions which could have been worth lessons for staff, community and Thai society to learn and improve. Thus, the Tobacco Control Research and Knowledge Management Center (TRC) was established to fulfill the purpose of effectively developing the tobacco control system. 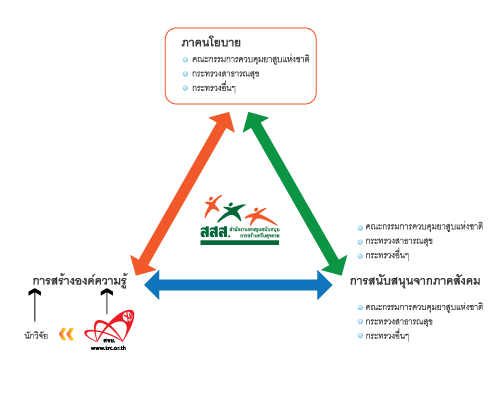 TRC is a non-profit organization affiliated of the Mahidol University and funded by Thai Health Promotion Foundation (ThaiHealth). TRC performance is under its steering committees and has its own director acts as both a TRC committee and a secretary.

Work Concept of TRC : TRC has run its processes and approaches of tobacco consumption control under the theory called ?Triangle that Moves Mountains proposed by Professor Dr. Prawase Wasi. The ideas of this theory are as below:

The fight of tobacco control would gain continuous national success by applied the theory of a Triangle that Moves Mountains consisted of (1) Political Support, (2) Social Movements and (3) The application of relevant knowledge. And those would lead us to a concrete change. TRC will be responsible as an intelligence construction by researching and knowledge management in order to support civil society sector in moving the policy forward.