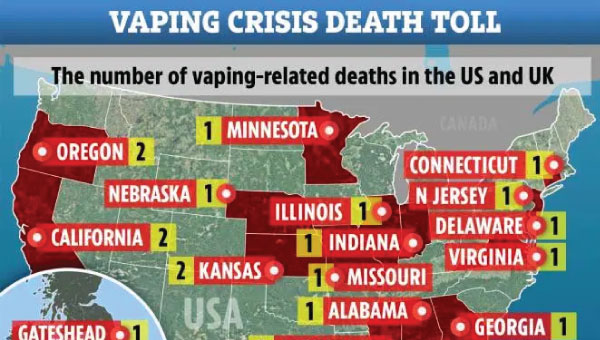 Nineteen deaths have now been reported across the US while cases of those contracting the mysterious lung disease has surged beyond 1,000. 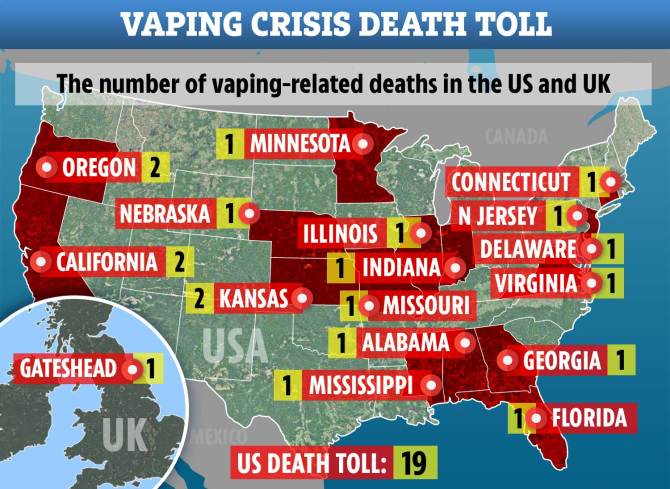 The latest fatality was reported in Connecticut with health officials confirming that a patient in their 30s died last week.

The patient, who hasn't been identified, had a history of vaping and was in hospital for some time before they died in August, officials said.

It comes as the Centers for Disease Control and Prevention (CDC) said cases had reached 1,080 confirmed and probable cases - up a quarter from the previous week.

As of Tuesday afternoon, the agency said cases were reported in 48 states and one US territory.

The CDC had yet to include the Connecticut victim, but said that so far the 18 deaths were across 15 states.

It was also revealed that a man from Nebraska died in May before the epidemic in the US was officially reported.

Prior to that, there were two deaths in California, two in Kansas, two in Oregon, and one each in Illinois, Indiana, Minnesota and Missouri, according to the CDC.

More than a third of patients are under age 21, but the deaths have been older adults who apparently had more difficulty recovering.

Meanwhile, the first British victim believed to have died from the vaping-related lung illness was named as Terry Miller, 57, from Gateshead, Tyne and Wear.

The growing death toll has prompted officials to launch an investigation by the Food and Drug Administration.

However, they are still struggling to identify a ­single product or chemical in e-cigarettes behind the outbreak.

Until a cause is found, experts are warning people to "refrain" from using any vaping products.

Dr Anne Schuchat, the CDC's principal deputy director, said: "We're worried that there are plenty of risky products still out there.

"That's one of the reasons we've intensified our warnings."

Advising people to steer clear of vaping products, she added: "It is pretty much impossible for you to know what is in the e-cigarette or vaping product that you're getting, particularly THC-containing products bought off the street or bought from social sources."

Worryingly, she also admitted that the crisis had shown no sign of slowing.

"The data we are getting does not suggest this has peaked," she said.

Complicating the investigation are apparently conflicting medical reports about whats been seen in the lungs of different patients.

Some doctors suggested patients lungs are being clogged and inflamed by oils from vaping liquids, but a new report pointed to the kind of chemical burns that might come from poisonous gases.

The study, published in The New England Journal of Medicine yesterday, revealed the lung injuries were most likely caused by direct toxicity or tissue damage from noxious chemical fumes - similar to those seen in industrial accidents.

Researchers from the Mayo Clinic have manged to review lung biopsies from e-cigarette users who were suspected to have the vaping lung injury.

How safe are e-cigarettes in the UK?

In the UK, e-cigarettes are tightly regulated for safety and quality.

They're not completely risk free, but they carry a small fraction of the risk of cigarettes.

E-cigarettes do not produce tar or carbon monoxide, two of the most harmful elements in tobacco smoke.

The liquid and vapour contain some potentially harmful chemicals also found in cigarette smoke, but at much lower levels.

While nicotine is the addictive substance in cigarettes, it's relatively harmless.

Almost all of the harm from smoking comes from the thousands of other chemicals in tobacco smoke, many of which are toxic.

Nicotine replacement therapy has been widely used for many years to help people stop smoking and is a safe treatment.

There's no evidence so far that vaping causes harm to other people around you.

This is in contrast to secondhand smoke from smoking, which is known to be very harmful to health.

Experts likened the injuries to when someone is exposed to a toxic chemical spill, or when soldiers breathed in deadly mustard gas during WW1, reports the Star Tribune.

The illness was first reported in April and all patients are known to have used e-cigarettes — some containing the cannabinoid THC.

Symptoms can include fatigue, coughing, breathlessness and vomiting or diarrhoea.

States have begun banning e-cigarette sales and the first case has been reported in Canada.

New York was due to ban flavoured e-cigarettes but it's been put on hold after a court ruling at the 11th hour, it's been reported.

A report from the Medicines and Healthcare Products Regulatory Agency in the UK says 200 health problems are linked with e-cigarette use.

The health watchdog has recorded 74 reports of health problems suspected to have been caused by e-cigarettes since 2014.